The set also contains eight minifigures and two vehicles. Also featured with this set are three exclusive 2×2 gold bricks that cannot be obtained in any other set.

Included also are eight minifigures made to look like they are from the 1950’s. The movie theatre was coloured blue, red, and tan. In the middle of the bottom floor was a reception counter, and around the reception counter were different movie posters featuring movies from the 50’s era. At the bottom of a middle part was a staircase going up to a transparent door.On the two sides of the door were two white columns, and on both sides of the clock were two smaller white columns. On the bottom were gardens, filled with flowers, protected by a black fence encircling it. On the far right of the set was a street lamp. On the far left was a city map, with a red point on the map. All three parts of the building had grey roofs. On the inside of the town hall was plants and a ceremonial stage for weddings.

Both buildings were basically rectangular grey base plates with a rectangular roofs. The roof were held up by four pillars placed at each corner of the rectangular base plate. Both were mostly white, with a bit of green and red. Inside the first part was filled with areas to hold tools, including a box and a tool holder. The second part had a door, leading into an office were a man sits at his desk. Under the desk there is a yellow banana and a green apple. A tree is standing on the side of the building. The base is green, and blue coloured bricks are encircled by grey bricks. Two benches are standing on the opposite sides. In the centre of the fountain there is three special edition gold bricks that are exclusive to this set. One vehicle is a blue car and the other a red tanker. The blue car is used as the honeymoon car for the bride and groom while the red tanker is used for delivering fuel for the petrol station. He also comes with the classic yellow head piece with a shy grin on it. The torso he comes with has tuxedo printing and for his legs they are solid black. Her head piece comes with a smile but it is not a normal classic one. Her torso has flowers printed on it and she comes with a sloped brick piece instead of a normal leg piece stimulating a dress instead. The pedestrian comes with a plain brown hairpiece and a classic yellow head piece with a smiley face printed on it. He also comes with a plaid torso in dark blue and grey unprinted legs. The company’s “belief in the unlimited possibilities of play” and dedication to producing the best possible toys is highlighted by this huge, intricate set.

We did have about 20 left-over pieces at the end of construction, which puzzled our tester. The cinema got a big thumbs up for having cool, realistic details like popcorn at the concession stand and a movie on the screen. The moving garage door and the scrubbers in the car wash were big hits, too. This pushed lots of play out into the open area around the fountain. The three gold bricks in the fountain add a unique touch to this particular set.

Overall, this is an expansive town set that promises lots of creative construction projects. Additionally, with its unique 1950’s vibe, this town is set to inspire fun, interactive play between parents or grandparents and kids. Odds are, you’ll even find yourself driving the vintage car through the wash after your children have gone to bed–it’s that cool.

We put the related parts on paper plates so they wouldn’t keep getting bumped off the table. He liked building something that was a replica of the original and he got a lot of encouragement to continue from seeing each section completed. Set is rated 12 and up but my 9 yo assembled it with ease.

I think the under 100 is a terrific price point for it. Comes with several mini figs and vehicles. Makes a good size town with all kinds of buildings, people and vehicles to build. Although it is marked for the age bracket of 12-14 years old, my 8 year old grandson had the patience to tackle this. It takes some time to create, providing many hours of fun.

When completed it is a good size, but not huge, so he was able to keep it set up to play with over and over again. The 8 year old could build most of it himself but needed a little help from older brother and dad. Great buildings, nice assortment of pieces, is definitely one of the favorite sets ever worked on as rated by the kids. He tells me that they always come in perfect order with a few extra pieces. He uses the extra pieces to create some structures of his own. They must be very durable because he has never had a problem with breakage. He is 13 and able to build many sets above his age level. My grandson is in gifted classes and loves the challenges of the more advanced sets. Overall, these products are one of the very best toys available for children. This a great toy for any kid who likes to build and imagine. Its a lot of pieces and sticker to put together, its worth the time. The price was a little high but worth the price and the delivery was fast. Hence low rating on “durability”–lose one piece and you’ll be unable to complete a portion of the city. Inspire exciting adventures and stimulate creativity with this building set that includes everything that’s needed to complete the build. Featuring an impressive piece count of 1, 981, this set is challenging to put together, and presents plenty of engaging activities for hands-on fun. There is a great fountains with a nice water piece and special gold bricks. 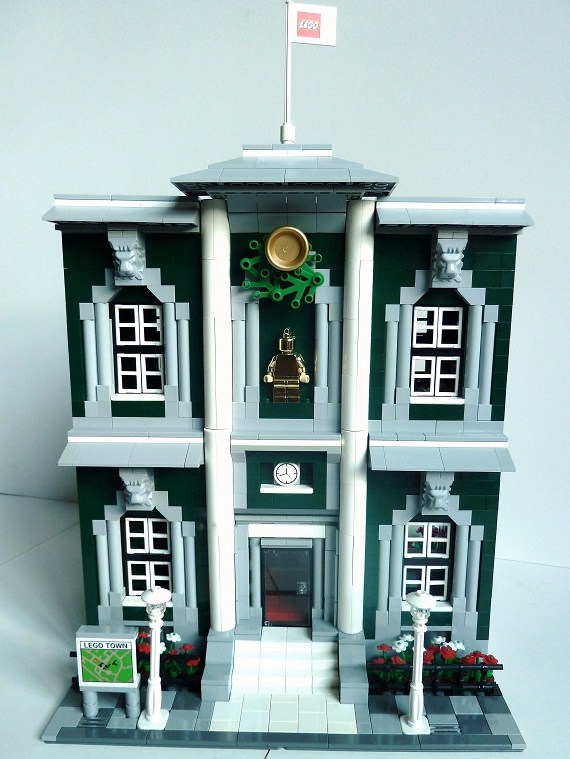